Holy Monastery of Saint John the Forerunner in Serres, Greece 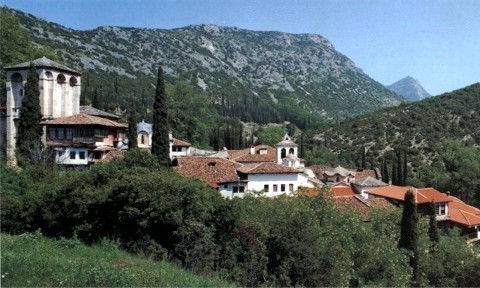 In the botton of a ravine on Mt. Menikion, 8 kilometres north of Serres lies the Monastery of Timios Prodromos (Venerable Forerunner). Since 1270 when the monastery

was founded by Saint Ioannikios from Serres and later taken over by his nephew Saint John, this holy monastery has offered tremendous help in the spiritual and ethnic struggles of Hellenism.

A University school operated within the monastery for 300 years where many people graduated as doctors, teachers, priests, etc. The first Patriarch after the fall of Constantinope, Gennadius Scholarius, lived as a monk in the monastery and remained there until his death. His grave is found in the Mesonyktiko of the monastery's chruch.

A great deal of the monstery's destruction was caused by the Bulgarians during their raids in 1917 and in 1941. Most of the monks were killed and the consecrated vessels and a vast array of manuscipts and books were stolen. Recently the stolen treasures were found in Sofia, Bulgaria, but have yet to be returned to the monastery. After the second raid and the killing of its monks, the monastery was left in ruins. However, with God's help the monastery became a convent in 1986. From then onwards, the new sisterhood has continued the Orthodox tradition passed on by the Fathers of the monastery, not only in the restoration of the ruined buildings but even more, in offering the pious people who visit, all the the spiritual aid they yearn for.